Hello. Long time no see. With a week off work I have a little time to tinker with potential new projects, and so I thought I’d also look at firing up this blog again – hopefully I can stick with it this time.
So I decided to sift through all my old prototypes looking for something I fancied revisiting – and came across the rather uninspringly named “DrivingGame” (I’ve mentioned before that the first thing you need for a new project, even before you’ve drawn a pixel or written a line of code, is a name for your game, and I’ve long-since given up trying to be clever with these). 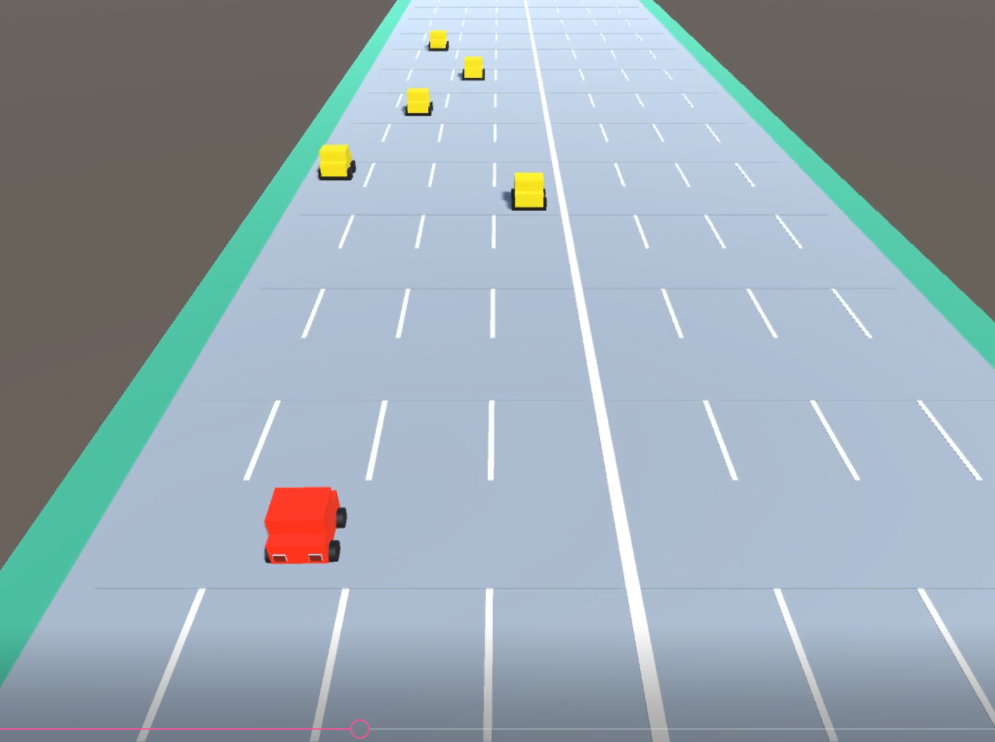 Regardless, I want to do something nice and quick, and this feels about right. It was originally meant to be a very simple game of dodging traffic, with the player not having full control of the car – just the ability to switch lanes, and accelerate and brake. It was loosely based on a spiteful old arcade game that I have a fondness for – Road Fighter:
This first attempt never went anywhere – perhaps because it felt a bit “appy”. But firing it up again, I rather liked the look of it, and remembering the game it was based on, I came up with a new idea and a new working title – Road Bastard! This isn’t just a working title – this is pretty much my entire game design document right now. Enable the player to be a “road bastard” (whatever one of those is), and reward them for it.
A word on game design documents. When I worked as a Creative Manager, and then as a Game Designer, game design documents were things I came to hate with a passion. You had to write one for every project, detailing the story, and the characters, and the gameplay mechanics, and every other aspect of the game to win a contract with a publisher initially, and that’s fine and understandable. But the moment you win that contract the thing should be thrown in the bin and never mentioned again. It isn’t though. It’s maintained throughout the duration of the project to record the current state of the game. But because the game will almost certainly deviate from the design document within weeks of the start of development (at most) and continue to do so throughout its development, the game design document then spends the entire project chasing the current state of the game, needing to be updated every time a new change is made. It’s a colossal waste of time for a document that I’m pretty sure never gets read by anyone other than the poor sod who has to maintain it.
Anyhow, the first thing to do to make this better was to rip out the old control method and put in a new one, allowing proper freedom of movement. First up this meant just getting the car to move across the road, rather than snapping from lane to lane. This was an improvement, but not enough. So then I just added the cosmetic touch of rotating the car as it moved from side to side, and that immediately felt so much better with the car weaving, rather than sliding, around (so often these tiny touches are critical). Obviously, this is made entirely out of placeholders so far, but it has potential, I think:
As you can hear in the video, the car has a horn – if you’re making a car game then you can’t add the horn early enough, IMO. Maybe wait until it can move and steer first, but there’s no harm in doing it first. It doesn’t matter if you don’t plan on making it affect the gameplay at all – there is no downside to adding a horn. In the case of this game I’m thinking of perhaps making it intimidate the car ahead of you – maybe make them act erratically – that could be funny.
So, that’s the current state of play. Next up, I want to work on some “low hanging fruit” to push it towards where I want it to be. I’ll add in some scenery to fill in the gaps off to the side because they’re bugging me. I also want to add a night-time mode. Whilst working on this I remembered some of the very early arcade driving games like Night Driver, and I think a brutally dark colour scheme would work well here (whilst the player should be a bastard, the game will probably be a bastard right back at them). Also – and this is very important – I’ll look at replacing the current horn sound (beep) with an angrier looping sound, so that the player can hold it down for as long as they want – that’s what a “road bastard” would want.