This is the work-in-progress of Super Critter Kill, a game knocked up in a few days for a competition. The name is a working title that I’m not particularly fond of (it was originally called Fur Cry, but I changed that before posting here to prevent getting sued).

It’s lacking in many many areas, and obviously absolutely everything should be considered really early placeholder work, but it’s available to download and play for PC via the link at the bottom of this page. It was created in XNA so a link is provided for the runtime files it needs. 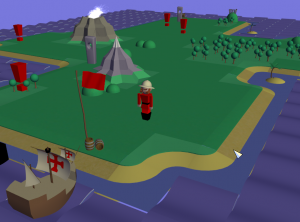 As mentioned, this was made in a very short time for a competition – the theme of which was Procedural Generation. The original intent was to procedurally generate an island, and make a 3rd person exploration game along the lines of Strange Adventures in Infinite Space, or The Wager – a typical island is shown opposite.

However, with just a few days left I realised I was nowhere near getting anything I could call a game out of that, so needed to come up with something else instead.

As an aside this original game went on to be my primary project (now on hold), and it’s one I’d dearly love to return to – but it’s massive. The basic premise is that the player is a Victorian-era explorer on a mysterious fantasy island populated by all manner of tribes and NPCs. The gameplay was intended to be almost entirely decision making with all manner of interesting consequences occurring based on the player’s actions. I do hope to return to this one in future, because it’s perhaps my favourite thing that I’ve worked on. (In the image below Branston is the players hapless manservant). At the very least I may cover it in a future WIP. 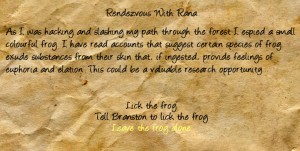 Returning to SCK and the problem of the impending deadline – I’d always wanted to try making a first-person shooter, and knew the beauty of working in 3D is that a quick camera change gets you a different genre cheaply. So I quickly moved the camera down to eye-level and placed it at the player’s position and it worked a treat. I then changed the control method to move the camera around, and added mouse control for looking around 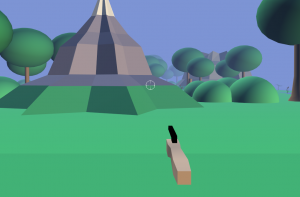 Then I knocked up a quick arm and gun model, and positioned it just below the camera (the picture shows it with the camera pulled a little further back). Finally I added a bullet and got shooting in the game.

With that done I needed enemies, and with the art style and the time constraints I plumped for cartoon critters. Throughout my career as a game designer my stock response to the question “how do we improve this game?” is the answer “bears” so that’s the first thing I made, and added to the game. 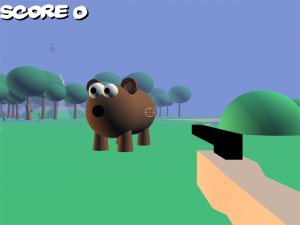 Next up I needed to be able to shoot the bear so I hacked in some collision. Collision is a real weakness for me (hence there being no landscape collision in the game yet), so I fell back on trusty old spherical collision. I know just enough maths to transform a line of spheres to create approximate sausage-shaped collision which was good enough (and incredibly fast). 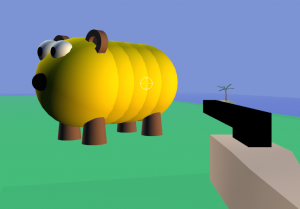 Having made the switch from XNA to Unity now, collision really isn’t an issue. I could probably even go the extra mile and not have completely flat landscape.

With that in place though I now needed to add behaviours to the bears. I kept this simple and created a set of states for them to be in.

I then set up a simple set of timers to populate bears. There’s an upper limit of bears in the world at any one time, and the game spawns bears periodically until it’s reached. The maximum number of bears then also goes up over time so the game gets harder and harder. 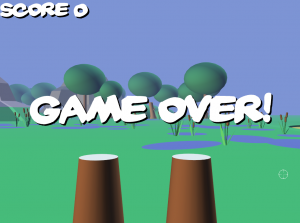 With that in place I’ve almost got a game. I just need player death. This is handled really crudely – if a bear gets close enough you’re dead. It’s so harsh I put a warning alarm in when they get near, but it’s not a good solution.

However there was just enough game there that I decided to spend the remaining time creating new art assets – a swamp landscape type, and the panda and tiger models (largely recoloured bears). Perhaps the time would have been better spent adding scenery collision, route-finding for the critters or gameplay design that aspired to be better than the bare-minimum possible to call it playable. 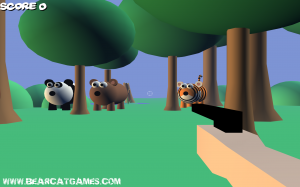 So this is how it entered the competition – unsurprisingly it didn’t win. Afterwards I added the balloons/parachutes to the bears, and for release on this WIP I added the bear trap and crate pickup to make it slightly more worth a download.

So that’s largely where this prototype stands – the barest semblance of a game but bags of potential I reckon. If I was to resume this project the plan going forward would be as follows:

The game is available to download below. Simply unzip it somewhere and double-click the exe to play. One warning though – the video at the top of the page shows pretty much everything that’s in the game – it’s fun to pootle around in, but there’s not much in the way of gameplay beyond shooting endless critters.

Finally, I’d love to hear any feedback for this game, so please feel free to post in the comments below.